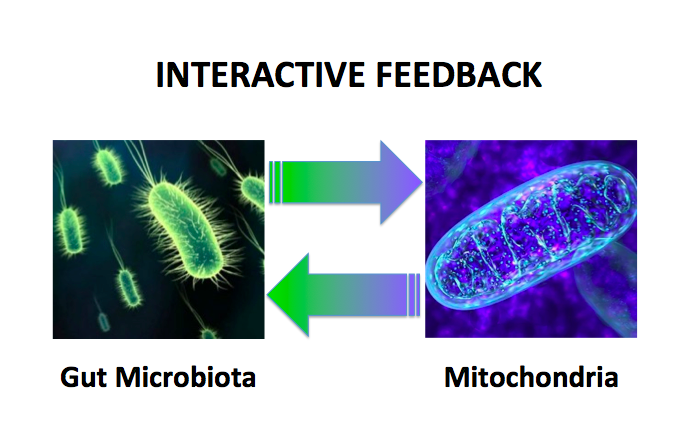 The gut microbiome plays a key role in regulating the optimal degree of response to exercise required to stimulate desired adaptive changes.

We have at least as many bacterial cells as human cells in our bodies. We are all familiar with the effects of disturbing the balance of beneficial microbes in our gut. Beyond this, the gut microbiome (the range of microbes, their genetic material and metabolites) is essential for health. An interactive feedback exists between gut microbiota and functional immunity, inflammation, metabolism and neurological function

Sports performance: endurance exercise increases metabolic, oxidative and inflammatory stress, signalled by the release of exerkines from exercising tissue. This signalling network induces adaptive responses mediated via the Endocrine system. Maladaptation to exercise can be due either to an undesirable over-response or an insufficient response.

Intricate interactive feedback links exist between mitochondria and the gut microbiota. In addition to being the power generators of all metabolically active cells, mitochondria produce reactive oxygen species (ROS) and reactive nitrogen species during high intensity exercise. These oxidative stress signals not only mediate adaptive responses to exercise during recovery, but influence gut microbiota by regulating intestinal barrier function and mucosal immune response. Mitochondrial genetic variation could influence mitochondrial function and thus gut microbiota composition and function. Equally, the gut microbiota and its metabolites, such as short chain fatty acids, impact mitochondrial biogenesis, energy production and regulate immune and inflammatory responses in the gut to mitochondrial derived oxidative species. So nutritional strategies to support favourable gut microbiota would potentially support the beneficial effects of the interactions described above to optimise sport performance in athletes.

Conversely, disruption to favourable diversity of the gut microbiota, dysbiosis, is associated with increase in both inflammation and oxidative stress. Not a good situation for either health or sport performance. Alteration to the integrity of the intestinal wall increasing permeability can also be a factor in disrupting the composition of the gut microbiota. The resultant increased antigen load due to bacterial translocation across the gut wall is linked to increased inflammation, oxidative stress and metabolic dysfunction. “Leaky gut” can occur in high level endurance exercise where splanchnic blood flow is diverted away from the gut to exercising tissues for long periods of time, resulting in relative hypo-perfusion and an effective re-perfusion injury on stopping exercise. In the longer term the increased levels of inflammation, oxidative stress and antigen load impair adaptation to exercise and are associated with endocrine dysfunction in chronic disease states, for example autoimmune conditions, metabolic syndrome (type 2 diabetes mellitus, obesity) and depression.

Evidence links the composition of the gut microbiota to changes in circulating metabolites and obesity. For example, low abundance of certain species of gut microbiota reduces levels of circulating amino acid glutamine, which acts as a neurotransmitter precursor. Bariatric surgery is associated with changes in the release of gut hormones regulating food intake behaviour and energy homeostasis. In addition, beneficial changes are seen in the gut microbiota which could directly or indirectly support weight loss, via action on gut hormones.

Metformin is frequency used to improve insulin sensitivity in both type 2 diabetes mellitus and polycystic ovary syndrome. However, the mechanism is poorly understood. There is now evidence that the effect of metformin is mediated via changes in gut microbiota diversity. Transfer of stool from those treated with metformin improves insulin sensitivity in mice. In addition metformin regulates genes in some gut microbiota species that encode metalloproteins or metal transporters, which are know to be effective ligands. The pathophysiology of metabolic syndrome and obesity involves an inflammatory component which is triggered by gut dysbiosis and bacterial translocation, with increased generation of oxidative species. Probiotics have a potential role in regulating the redox status of the host via their metal ion chelating ability and metabolite production, which has an impact on the production of ROS and associated signalling pathways. Prebiotics found in dietary polyphenols promote these actions of favourable gut microbiota, which is of benefit in metabolic syndrome.

Recently it has been postulated that the gut microbiome, apart from playing a crucial role in health and pathogenesis of disease states, also impacts brain development, maturation, function and cognitive processes.

Understanding the role of the gut microbiome on metabolism, inflammation and redox status is very relevant to athletes where an optimal response to exercise training supports adaptations to improve performance, whereas an over or under response in these pathways results in maladaptive responses.

For further discussion on Health, Hormones and Human Performance, come to the BASEM annual conference

Inflammation: Why and How Much? Dr N.Keay, British Association of Sport and Exercise Medicine 2017

The Crosstalk between the Gut Microbiota and Mitochondria during Exercise Front Physiol. 2017

Metformin alters the gut microbiome of individuals with treatment-naive type 2 diabetes, contributing to the therapeutic effects of the drug Nature Medicine 2017

The Impact of Gut Microbiota on Gender-Specific Differences in Immunity Front. Immunol 2017